Phase 1 commenced on April 26, 2012 and focused exclusively on the Guayabito deposit and is part of a planned 3-phase 20,000 meter diamond drilling program at its flagship Cisneros Project in Colombia. As reported in the press release of August 8, 2012, the program has resulted in expanding the length of known mineralized structures along strike to approximately 300 metres and has confirmed continuity to a depth of almost 500 metres with all structures remaining open along strike and depth. Also, several new mineralized structures were encountered with encouraging potential gold values. Plan and section views of the previous structures and the 2012 extension are illustrated in Figures 1 and 2 (and also found on the website www.antioquiagoldinc.com).

We refer the reader to the March 21, 2012 and August 8, 2012 News Releases for further background information.

Phase 2, consisting of approximately 5,000 metres of drilling divided equally between the Guaico and Papi/Ivana targets continues at Guaico and has been completed at Papi/Ivana. Laboratory results are pending and the resultant review and interpretation by the geology team will follow.

Antioquia Gold has been exploring for precious metals in Colombia since 2007 and has accumulated a land package of close to 40,000 hectares located throughout Colombia. Antioquia Gold’s principal asset, which is being actively explored, is its 5,630 hectare Cisneros Project, located 55 kilometres northeast of Medellin in the Department of Antioquia, Colombia. At the Cisneros Project the Company has conducted extensive geochemical and geophysical programs over the entire property and has identified to date 11 exploration zones. On the original discovery zone it has drilled over 40,000 metres and is well versed in the understanding of the deposit type and the project’s path to resource definition and production.

To ensure reliable sample results Antioquia has a rigorous QA/QC program in place that monitors the chain of custody of the samples and includes the insertion of blanks, preparation duplicates, field duplicates, and certified reference standards in each batch of samples. Core is photographed and sawed in half with one half retained in a secured facility for future reference if needed. Sample preparation (crushing and pulverizing) is performed at ACME laboratories in Medellin, Colombia.

This press release has been prepared under the supervision of Ian Fraser, P. Geol., Chief Geologist for Antioquia Gold Inc. and a Qualified Person as defined by National Instrument 43-101.

On behalf of Antioquia Gold Inc.

This news release may contain certain forward-looking information. All statements included herein, other than statements of historical fact, including, but not limited to, statements about the seven additional regional exploration zones adding significant exploration potential to the overall property, the Company’s plans for exploration in 2012, including the plans for 20,000m of drilling, are forward-looking statements. Forward-looking statements are based on management’s assumptions and are subject to risks and uncertainties. There can be no assurance that any forward-looking statement will prove to be accurate, and actual results and future events could differ materially from those anticipated in such information due to a number of factors beyond the Company’s control. These assumptions, risks and uncertainties include, among other things, management’s assumptions about government permitting, equipment procurement and the availability of the necessary consultants and capital, as well as the risks of delay in any of these activities and the risks inherent in Antioquia Gold’s operations, including the risks that the Company may not find any minerals in commercially feasible quantity or raise enough money to fund its exploration plans. These and other risks are described in the Company’s Annual Information Form and other public disclosure documents filed on the SEDAR website maintained by the Canadian Securities Administrators. The Company does not undertake to update any forward-looking information except as may be required by applicable securities laws. 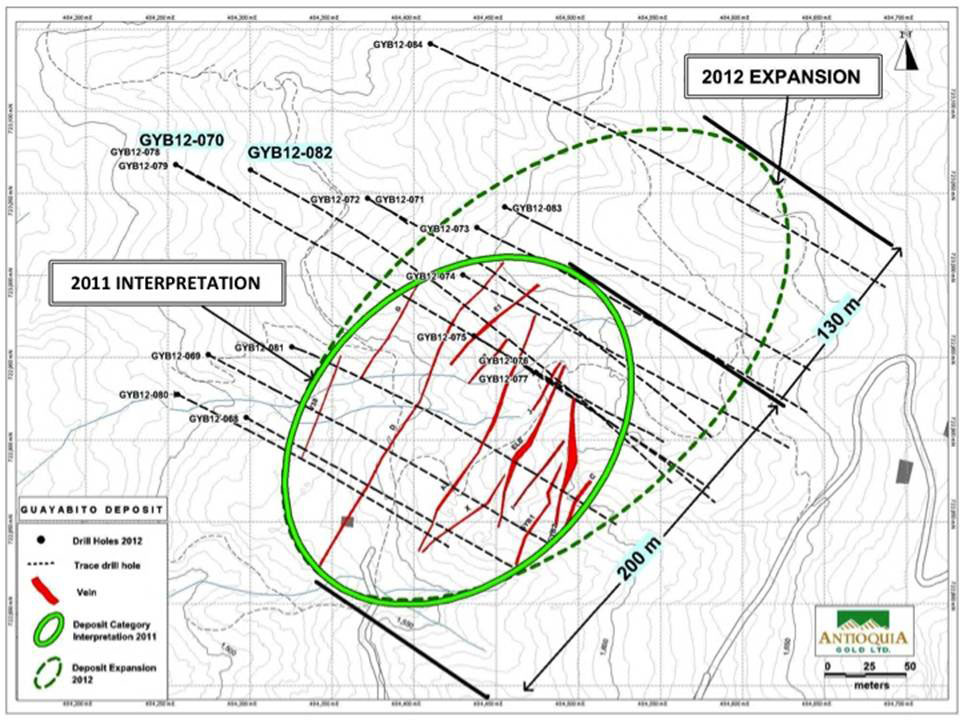