December 8, 2009, Calgary, Alberta: Antioquia Gold Inc. (TSX-V: AGD) (“AGD” or “the Company”) is pleased to provide an exploration update and status of the ongoing drilling program at the company’s Cisneros Project in Colombia.
AGD is a mineral exploration company focused on searching out precious metals and other mineral opportunities in Colombia. The Company’s principal asset is its Cisneros Project located 70 kilometers northeast of Medellin in the Department of Antioquia, Colombia. The Company’s exploration activity to date has been focused on geological reconnaissance (mapping and sampling), evaluation of artisanal mining activities in the area, and more recently the commencement of a drilling program to understand more clearly the geological setting. At present, the Cisneros Project is considered exploration stage in which no known body of commercial ore has been developed yet. AGD is also currently evaluating other opportunities to expand its portfolio of mineral exploration properties in Colombia.

The Guayabito Property and the La Manuela Property have been the primary focus of the company’s exploration activities to date consisting of surface soil and rock geochemistry, trenching, structural and alteration mapping, as well as mapping and geochemistry of historic artisanal mine workings in the area. There are over 20 historic artisanal mines in the area where locals extracted gold for over 100 years. 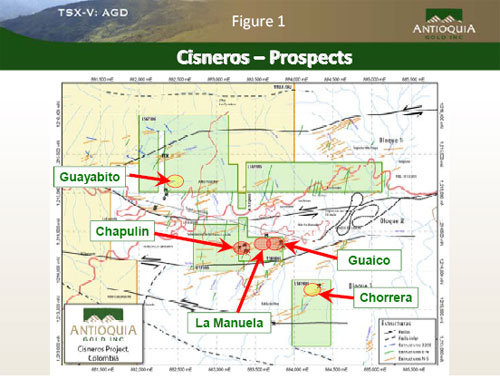 In addition, as a result of the acquisition of IGTER, the company has the opportunity to evaluate and acquire a portfolio of lands that could exceed 1 million hectares. Work is currently in progress, aggressively screening and assessing these opportunities and securing lands with attractive geology and mineral potential for future projects.