CALGARY, ALBERTA – (Marketwired – Aug. 29, 2013) – Antioquia Gold Inc. (‘Antioquia Gold” or the “Company”) (TSX VENTURE:AGD)(OTCQX:AGDXF) is pleased to announce that it has received a National Instrument 43-101 (“NI 43-101”) compliant resource report (the “Report”) for its flagship Cisneros gold project in Antioquia Department, Colombia. The report was prepared by Mr. Fernando Linares, MAusIMM of Lima, Peru, who by reason of his education, affiliation with a professional association and past relevant work experience, fulfills the requirements of a “qualified person” as defined in NI 43-101.

The Report has an effective date of August 29, 2013 and the Company intends to file the complete report on SEDAR on or before October 13, 2013. It should also be noted that Antioquia Gold has identified an additional six targets that merit further exploration via diamond drilling.

The main objective of the Company’s drilling campaign during the past year was to increase resource confidence levels at the Cisneros gold project in Antioquia (see the Company’s press release dated November 29, 2012). This was done in order to begin work on a new Cisneros reserve estimate and mine plan. Antioquia Gold’s drilling has been successful in upgrading a large portion of the previous internaliy classified Inferred Resource. Independent consultants LINAMEC S.A.C. have reviewed and validated the mineral resource on behalf of the Company and categorised all resources using the Canadian Institute of Mining, Metallurgy and Petroleum (“CIM”) classification. A constraining Au 1.0 g/t cut-off shell was applied to the 3D block model to ensure reasonable prospects of economic extraction for the reported resources.

The present resource evaluation of the Cisneros Project includes the individual resources of four areas: Guaico, Guayabito, Nus and Papi. The data base used comes from 141 drill holes and 35,400 metres of drilling.

Mr. Edgar Vilela (MAusIMM – CP), a Qualified Person under National Instrument 43-101 Standards of Disclosure for Mineral Projects of the Canadian Securities Administrators and Mr. Fernando Linares (MAusIMM) reviewed and approved the scientific or technical disclosure in this release and have verified the data disclosed.

Contingent upon successful achievement of the above milestones, the Company feels that it will have identified sufficient resources to aggressively pursue project financing for a nominal 500 tpd underground mining operation at Cisneros in the shortest time frame possible.

The Company also announces that it intends to complete a non-brokered private placement for aggregate gross proceeds of up to $1,000,000 via the issuance of common shares at a price of $0.05 per common share. The majority of the proceeds from this public offering will be used to complete the current studies necessary to achieve the aforementioned milestones. A Finder’s fee in cash of up to 8 percent of the gross proceeds introduced by any particular Finder in connection with the issue and sale of any or all of the Units under the Offering.

As stated in its press release of May 2013, the Company’s Board of Directors and its senior management team remain focused on executing its longer term business plan of assembling information to make a production decision for its flagship Cisneros property by the end of the 2014 calendar year.

On behalf of Antioquia Gold Inc.

Figure 1: Locations of the Mineral Deposits 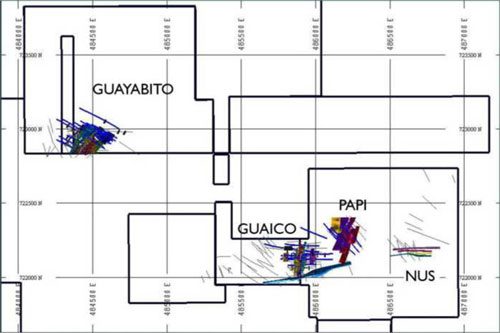 Antioquia Gold has been exploring for precious metals in Colombia since 2007 where its current holdings are close to 40,000 hectares located throughout Colombia. Antioquia’s principal asset, which is being actively explored, is its 5,630 hectare Cisneros Project, located 55 km northeast of Medellin in the Department of Antioquia, Colombia. At the Cisneros Project the Company has conducted extensive geochemical and geophysical programs over the entire property and has identified to date eleven (11) exploration z ones. On the original discovery zone it has drilled over 45,000 metres and is well versed in the understanding of the deposit type and the project’s path to resource definition and production.

This press release has been prepared under the supervision of Mr. Jim Decker, P. Eng., director of Antioquia Gold Inc. and a Qualified Person as defined by National Instrument 43-101.

For further information on Antioquia Gold Inc., visit our website at www.antioquiagoldinc.com

Forward-Looking Statements:
This news release contains certain forward-looking statements, including any plans regarding the preparation and timing of a National Instrument 43-101 compliant resource report and accompanying PEA. Forward-looking statements are based on management’s current assumptions and are subject to risks and uncertainties. There can be no assurance that any forward-looking statement will prove to be accurate, and actual results and future events could differ materially from those anticipated in such information due to a number of factors beyond the Company’s control. These assumptions, risks and uncertainties include, among other things, management’s assumptions about government permitting, equipment procurement and the availability of the necessary consultants and capital, as well as the risks of delay in any of these activities and the risks inherent in Antioquia Gold’s operations, including the risks that the Company may not find any minerals in commercially feasible quantity or raise enough money to continue to fund its exploration plans. These and other risks are described in the Company’s public disclosure documents filed on the SEDAR website maintained by the Canadian Securities Administrators. The Company does not undertake to update any forward-looking information except as may be required by applicable securities laws.