September 27, 2010, Calgary, Alberta: Antioquia Gold Inc. (TSX-V: AGD) Antioquia is pleased to announce continued success of the drilling program and the latest drill results from the 5 hereto unreported holes on its Guayabito Prospect at the Cisneros Gold project in Colombia (PC10-33 through PC10-37). Additional sampling is continuing to further define the rock characteristics adjacent to the main mineralized structures needed to define resource calculations and mine design parameters. Figure 1 shows the location of all the prospects drilled to date on the Cisneros Project.

Results of this report continue to demonstrate zones of very high grade gold mineralization in the Guayabito area and augment those previously reported in press releases from (December 21, 2009, January 25, 2010, June 14, 2010 and August 9, 2010). Highlights of this report include drill hole PC10-35 encountering 0.5 meters at 140.4 g/t gold and PC10-37 encountering 1.3 meters at 22.6 g/t gold. Table 1 shows significant intersections and gold values from the latest drill program.

Drilling and geological modeling to date has identified a series of parallel structures on the Guayabito prospect area containing high grade mineralization in a plane oriented (striking) approximately north south and vertical. Two of these structures (Bolo and Guayabito) have been traced over approximately 150m along strike to the north and to a depth of 250m on the property. Figure 2 shows the surface trace of the Bolo and Guayabito structures, which are open to depth and to the north. As previously reported these structures are dominated by mineralization consisting of quartz and sulphides (chalcopyrite, and pyrite). Gold is closely associated with sulphides and quartz.

Logan Drilling has been contracted to complete the remaining footage of the previously announced 10,000m drilling program for 2010. The drilling will focus on defining the Bolo and Guayabito structures to the north and to depth. Figure 3 is a longitudinal section on the Bolo structure showing where existing drill holes intersect, and proposed drill holes are anticipated to intersect, the structure. Details of these intersections can be found on the website at www.antioquiagoldinc.com.

Drilling has continued to validate the model and structural interpretation provided by Bob Casaceli. He suggests that the east-west driving structures have acted as left-lateral strike-slip faults that have locally created en echelon dilational jogs with maximum extension having been developed along secondary north-south faults, such as the structures currently being drilled at Guayabito, where attendant low-pressure zones favored fluid injection and subsequent gold deposition. This interpretation explains why higher gold grades at Cisneros tend to occur along north-south faults, and along east-west faults near intersections with north-south faults.

Antioquia is a Calgary-based mineral exploration company, focused on searching out precious metals and other opportunities in Colombia. The Company’s flagship property is the Cisneros project, located 70 kilometres northeast of Medellin in the Department of Antioquia in Colombia.

To ensure reliable sample results Antioquia has a rigorous QA/QC program in place that monitors the chain of custody of the samples and includes the insertion of blanks, preparation duplicates, field duplicates, and certified reference standards in each batch of samples. Core is photographed and sawed in half with one half retained in a secured facility for future reference if needed. Sample preparation (crushing and pulverizing) is performed at SGS laboratories in Medellin, Colombia.

Prepared samples are direct-shipped to SGS Laboratories in Lima, Peru, an ISO certified laboratory, for analysis. Assay for gold is performed by fire assay with 30 g charge and AAS finish, with a gravimetric finish for over limit samples. 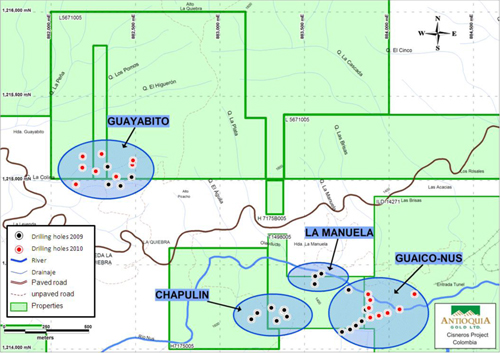 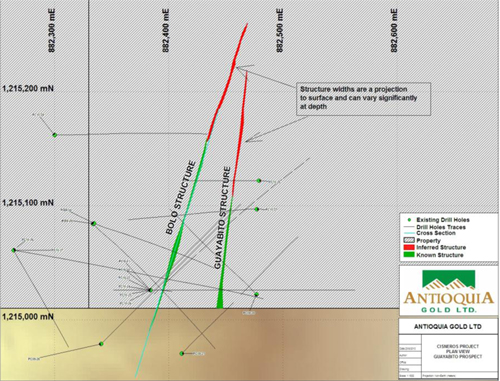 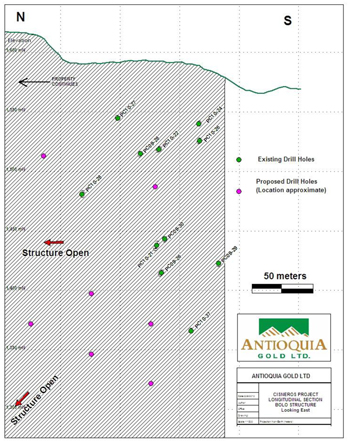